Like the way my brain works? Consider my most recent book then, won’t you?

“The image of a grown married man dressed in khaki shorts, a corporate logo polo, deck shoes with no socks, complete with braided belt turns my stomach. The image of that same gent leaning his body from a seated position as far over the nicked brass railing of a stripper’s stage, with his tongue protruding as far out of his mouth as possible, in—I don’t know—the hopes that the all-nude stripper in front of him will “accidentally” back her ass into it… well, is one I’d pay big money to eternal-sunshine-of-the-spotless-mind-style-remove.”

These are words from a back-burner book slowly being written as I pen others that details some of my adventures in the business of advertising. And maybe a warning of sorts.

The other day my wife was kind enough to regale me with a David Sedaris’ interview in which the author recalled some embarrassing experiences while living in Paris, France. The gist of it was this: when he is the victim of his own incompetency or the accidental fating of some awkward and absurd moment, the feeling sticks with him well after. He can’t help but think that those around him not only noticed, but took note, and are maybe carrying around his befuddlement as a story to tell. Not because he is famous, mind you. But because this is what he does; he observes people. All writers do.

I’m not here to lump myself in with Sedaris’. Honestly, I’m not even comfortable with referring to myself as a writer most days. I wonder if I ever will be. But, fair warning, I do observe. I do take it all in, and I use what I see when crafting characters, situations and the mayhem. Any fictitious character I create is likely some mighty amalgamation of personalities, quirks, sayings, that are thrust upon me, if not sought out, especially when I’m extra bored in a public setting.

Funny enough, as I’ve always done this, it’d never occurred to me that my own shortcomings, blow-ups, missteps, foot-in-mouth-events, short-fuse moments, and even the NSFW moments of my life might be working their way into some other author’s book or books. In a way, maybe books have long been making people famous without them even knowing it. At the very least, some part of that person. Some tiny little thing you often do, or some monumental mistake you once made, right now, could be making its way into another’s prose. And with the huge surge in self-publishing, I suspect it’s happening far more frequently than ever.

But worry not, nobody reads anymore. Right? 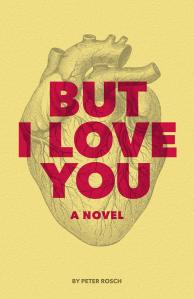 This week I’ll be pushing my sophomore literary effort, But I Love You, into the world with a plug-it-until-it-makes-people-puke enthusiasm. Then, when the dust settles, the pride built over a two-year crafting of words into story will do its best to withstand the free-flying stink of negativity that might eventually accompany it on its humble sale pages scattered across the internet. They’ll be good reviews (written by moms, friends, and even strangers), and they’ll be stuff that makes me question wether writing is my thing. That’s just part of the game. And like the first time, I’ll abstain from writing any particular individual to tell them just how wrong they are about it. I’ll remain chipper in the face of phrases like, “Do yourself a favor and skip this one. You’ll be glad you did,” and “Such promise to fall so flat.” There’s a bevy of other choice barbs and stinging insults, some written by folks who were kind enough to only read the first chapter before “awarding” My Dead Friend Sarah one or two stars. You take the punches and move on. Hell, if you are me, you secretly hope that your book turns the insides of someone so intensely that they decide to come after you. You wonder how hard it is to get a restraining order. You fantasize about a blurb on some celebrity dot-com rag that mentions how you went to court to testify against the stalker. You aim for the kind of crazy that drove you to write the book in the first place. I didn’t set out to create a polarizing tale the first time. And though I’d toyed with the idea of doing so for the second story, the notion lost steam as I realized that action in and of itself would betray me. In the end, like the first time, I’d like to think that I’ve managed to merge some very real-world observations on the way we live with a story that moves quickly and keeps people entertained and wanting more. There’s more to the story, but I’ll need that material to bug you later in the week as I try and coax you our of a few bucks and some of your time.